The Fishing Info website appears to have been taken down by the Angling Trust and replaced with something inferior.

The list of Somerset river level monitoring stations can be found with the following link:-

I find the 'Monks Lease Wq' at Combe and the 'Oath' at Oath Lock locations give meaningful levels for the river. Scrolling down a page with show a chart of the variation in river level for the past week.

I hope this site is of some use to you.

Opening Day! It was going to be hot but we had to fish the river!

Fran and I chose to fish at the footbridge at Oath.

The grass in the field had been cut as well as the grass and nettles along the bank; we didn't have to do any clearing, which saved time.

I fished in the first swim above the footbridge and Fran fished just below it.

There was some weed on the bottom which meant you had to fish about 18 inches up to stop the float dragging under too much. Depth must have been about 15 feet. Fran started on a 6 metre whip but changed to a 7 metre whip later. He loosefed hemp and maggot but struggled for bites in the first few hours. Then he started catching on maggot and even caught on hemp. He caught roach and skimmers for a total of 3lb 4oz. I fished a 7 metre whip with a 2 gram pencil float rig. There was some flow of the water. I fished maggot or caster on the hook over loosefed hemp. I started catching, first cast, and caught a few roach, but mainly skimmers and chub for a total weight of 6lb 12oz.

Remember the 2-Metre Rule, keep your distance from other anglers and we'll all be safe.

Hand sanitiser is available at both gates for your protection.

The virus can live on metal for up to 72 hours so I spray the padlock and parts of the gates and latches with my disinfectant spray before touching them. A good habit to get into!

Please make sure you shut the gate securely in the otter fence when entering and leaving the lake.

We are finding, all to often, that the main gate is being left unlocked.

When you leave by the main gate, please make sure the padlock is correctly attached and locked securely. Scramble all the numbers on the lock.

Protect the lake, and your fishing, by ensuring that the gate is securely locked.

You are not allowed to fish with boilies at Combe Lake. Please read the Special Rules For Combe Lake in the Season Ticket and make sure you comply with all of them. If you're found breaking any of the rules, you will be asked to leave. The rules are there to protect the fish and the lake.

If you are fishing Combe Lake, why not let me know what you caught; photos of your catch would also be appreciated. We'd love to know how it's fishing for our members. Email me. We've noticed members have been propping the gate open recently with bricks while they drive in or out.

You'll find this is more reliable than propping the gate open with bricks. I've now taped the wire loop to make it more visible. 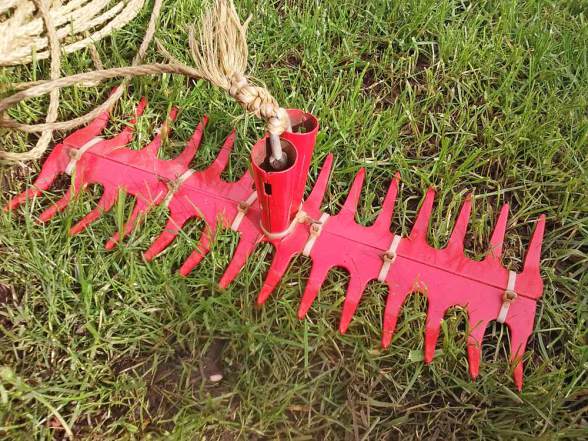 I know some members aren't happy about the weed in our lake. However, the weed is very beneficial to our fish and the waterfowl. It contains lots of food in the form of invertebrates. It provides shelter and protection for our fish. It also helps to keep the algae levels down and improve water quality.

Most of our fishing can be done in front of the platforms so we only need to clear the weed from where we want to fish. This is easily achieved by spending a few minutes raking before we tackle up. This gives a short period for the swim to settle before fishing. Raking also stirs up the silt which attracts the fish into the swim.

A simple weed rake (as shown above) can be made by joining two garden rake heads back to back and securing with cable ties. A length of strong nylon rope can be securely attached.

Fished Combe Lake for the first time since the rivers closed.

It was a warm sunny day with a light, occasional, cold north-easterly. Water temperature was about 15½°; warm for this time of year!

I fished on the east side of the lake and I raked my swim to clear it of weed before I tackled up.

I fished at a couple of rod lengths from the bank in open water. I used a 13 foot match rod and centrepin reel with a 1 gram insert waggler rig. This was set an inch off the bottom and after ringing the changes on the coloured pinkies, I settled on two red pinkies on the hook which caught fish all day. I fed an occasional handful of groundbait but didn't need to loosefeed.

After midday, when the water had warmed slightly, the bites dried up so I shallowed up a few inches and found the fish again. By the end of the session, I was fishing about a foot off the bottom and still catching.

I caught roach and rudd for a total weight of 3lbs.

Nice to chill out on a warm spring day! Next day it turned very cold!

The lake's looking good; there's some colour in the water. Plenty of Daffodils in full bloom and the odd tree in blossom. There is quite a bit of blanket weed floating around but it can be dodged.

The two trees blown over into the water by Storm Eunice will be cut up and removed by the tree surgeons sometime.

Fished the south-west corner of the lake to get the westerly wind on my back but it was also fairly sheltered.

It was overcast with some sunny periods and fairly warm. Water temperature was about 12½°.

Raked out a small amount of weed before tackling up.

I fished a 13 foot match rod and centrepin with a fine tipped waggler float rig, set a couple of inches off the bottom. I fished a single pinkie on the hook over an occasional few handfuls of groundbait. No loosefeed.

I caught roach, rudd, and a perch for a weight of 1lb 13oz. Early afternoon, I also caught this nice bream weighing 5lb 3oz.

We have a pair of swans nesting on the west side of the 'island' near the north end of the lake, something I've not seen there for about twenty years.

Please don't go anywhere near the nest; we'd like them to breed successfully. Any disturbance and they might abandon the nest. Please respect them.

Fran and I fished at the south end of the lake. Fran fished in the south-west corner and I fished next to him, opposite the point of the island.

It was warm with hazy sunshine to start with, then it clouded over and rained in the afternoon.

Water temperature was almost 16°C. The water was quite coloured.

We raked our swims before tackling up but we didn't find much weed.

Fran first fished with a rod and reel with a light waggler rig then changed later to a whip.

He fished maggot or caster over groundbait and loosefed hemp.

He caught roach and rudd for a total of 13oz.

I fished a 13 foot match rod and centrepin reel with a canal dart waggler float rig set two inches off the bottom. I fished over groundbait and lightly loosefed maggot and caster. I started off with maggot on the hook but with no bites, I changed to a single pinkie and started catching. Later, I changed back to maggot and continued to catch. Then I tried a caster and started catching a better stamp of roach and rudd.

I caught roach, rudd and a small perch for a total of 3lb 2oz.

There was less blanket weed than last week, probably washed to the bottom by rain. Some patches of it are still drifting around but not enough to cause much trouble!

Fran and I fished the south-east corner of the lake.

The day was overcast with some sunny spells. Water temperature was 17°C.

We raked our swims before setting up.

Fran fished an 8 metre pole with a fine-tipped waggler float rig. He fished maggot over groundbait to catch roach and rudd for a total of 2lb.

I again fished a 13 foot match rod and centrepin reel with a canal dart waggler float rig. I loosefed caster and maggot over groundbait with caster on the hook.

I caught roach and rudd  and the odd small skimmer for a total of 3lb 15oz (however, I did fish for an extra two hours after Fran packed up!).

A lot of the blanket weed has disappeared and there is a nice colour in the water. The lily beds are start to re-grow and the willow trees are turning green with new leaf growth.

Fished the east side of the lake close to the large lily bed.

The day was mainly overcast with a cold easterly breeze. Water temperature was 16°C.

I raked the swim before I tackled up to remove a few pieces of weed and stir the silt up.

I fished a 13 foot match rod and centrepin reel and a canal dart waggler float rig for sensitivity.

Loosefeeding maggot and caster over groundbait, I fished single or double caster on the hook which was set at about an inch above the bottom. When bites dried up later, I shallowed up to find the fish again and ended up fishing 12 inches off the bottom.

I caught roach and rudd for a total weight of 2lb 13oz.

I was pleased to see that the eastern arm of the lake is now clear of blanket weed with a small amount in the western arm. The lillies are growing well and there's tadpoles everywhere.

Fished the south-west corner of the lake, between the lily beds and a couple of rodlengths out in clear water. I raked the swim first, to clear a small amount of weed that had drifted in, and stir up the bottom. Water temperature rose from 16°C to 17°C​ during the day.

Bites were slow; fishing up in the water only produced a few fish. Fishing on the bottom produced an occasional bite but they were better quality fish and worth waiting for. I caught roach, rudd and a perch for a total of 1lb 10oz.

Just after midday, I caught this nice tench, weighing 4lb 12oz, on caster.

Fished the south end of the lake opposite the point of the island. It was a warm day of sunshine and cloud with a south-westerly breeze. Water temperature averaged 20°C during the day.

I raked the swim before I tackled up and removed strands of Hairlike Pondweed, which is starting to grow now.

A small amount of willow fluff was seen floating off the trees in the breeze; nothing to worry about yet!

I fished a 13 foot match rod and centrepin reel with a canal dart waggler float rig about two rodlengths out. Bait was maggot on the hook over groundbait and loosefed maggots. I couldn't get a bite on caster!

Fishing dead depth, bites were slow but I steadily caught roach, rudd and perch for a total weight of 1lb 8oz.

Just before midday and after a lot of fizzing in the swim, I caught this tench of 2lb 8oz.

Liam Clipson caught these two nice carp in early May!